Lexus LS has been in market since 1989, and gained a great reputation since then to be the primary full-sized luxury sedan in the whole Lexus collection.

Since its launch, the model witnessed four totally different generations all created to push the boundaries of sedan cars production higher and set new standards in this field.

The next model of LS is only a continuation of the same success story as the car will embrace the latest technicalities in the auto market and the finest updates.

It’s expected to come out with a series of modifications, which made car lovers very enthusiastic about its release waiting to check the new alterations by themselves.

The car maker didn’t elaborate a lot about it, however, we know that the new LS will be built on a XF40 platform and it’s expected to boast a petrol-electric hybrid engine to carry on its legacy as a premium Eco-friendly vehicle.

The new model will inherit the fourth generation 8-speed transmission, more likely to have the 5.0 liter V8 engine capable of generating huge vehicular power up to 439 horses, a power satisfactory for bolting from 0 to 100 kms in only 4.8 seconds.

Most noteworthy speed the new LS vehicle can easily hit on a high way is 210 km/h (equivalent to 130 miles/h).

The vehicle will have a calm, more sturdy than aggressive look, to feature in its new line up production.

The car front will embrace a number of renovations including placing a new pair of sharp and angular headlights along the side of large front grille, even bigger than the past models.

Small significant changes can be noted from the 2017 LS rather than the stretched wheelbase and the redesigned front lights, however, these tiny adjustments succeeded in granting it a new enhanced feel which will appeal for younger generations.

New colors have been added to the new model, for example, White Pearl and Starfire Pearl to give it sleeker look. 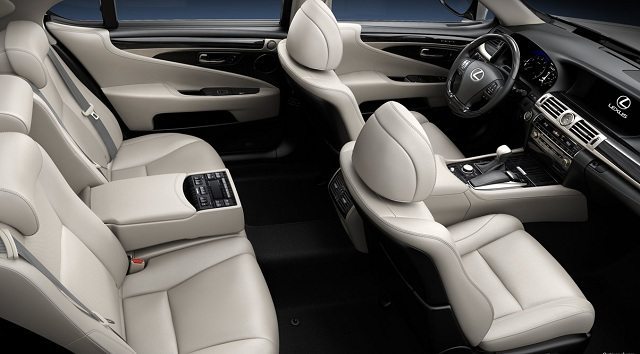 The car interior feature the same signature luxury and opulence of Lexus. It’s the perfect embodiment of the modern interior design concept based on comfort-magnificence mixture.

The seats can be oxygenated, heated, and extended to offer wider legroom for passengers. The interior cabin will incorporate different recreational features like screens and high-tech audio systems.

The Lexus LS 2017 price is expected to start at 85,000 dollars for the baseline model, while the more-equipped models could be worth 100k. The car is expected to get into production by the end of this year.

The luxury full-sized sedan car of Toyota is there to fiercely compete with its popular counterparts like the BMW 7-Series, Mercedes-Benz S-Class, and the Audi A8.

The car debut will be in the next Tokyo Motor Show along with the brand new premium LC coupe which will share the same platform of LS.

September 17, 2016AUTO ZNo commentsCars news and reviews
No comments yet