Volkswagen is quite clear that its newest Golf isn’t new at all, but rather a mid-life update that improves on an established formula.
At first glance the Golf 7.5 doesn’t look dramatically different from the Mark 7 that came before it, but under the surface Volkswagen has gone big on available technology adding new safety and convenience features.Under the catchcry of “premium for the people” the new Golf aims to keep pricing mainstream while including the kinds of features and technologies – even in its most basic trim – that might otherwise feature higher up the range of competitors products.For 2017 Volkswagen has massaged the Golf range slightly. The standard models (before getting into performance variants that launch next month) make up a four-variant range starting at the entry-level Golf and moving up through Trendline, Comfortline and Highline trims.

The previous 92kW base model engine has been scrapped in favour of the more competitive 110TSI petrol engine with 110kW and 250Nm on all variants, or a 110TDI diesel with 110kW and 340Nm available exclusively in Highline specification. A wagon also joins the range from Trendline and above.

Golf and Trendline hatch buyers can choose from a six-speed manual or seven-speed dual-clutch auto with auto-only available on wagons and all models from Comfortline and above.

Prices do move up slightly for base model cars owing to the more powerful engine, but are offset by added equipment with the range now opening from $23,990 with an introductory offer including free on-road costs for a limited time. Opting for the seven-speed automatic adds an extra $2500 while the most expensive 110TDI Highline wagon tops out at $38,490 plus on road costs or $40,490 driveaway from launch.

The interior of the Mark 7.5 Golf is as sensible as you’re likely to find in any modern small hatch. As with the exterior styling Volkswagen hasn’t torn up the rulebook on design, but there are some subtle changes.

Even the most basic Golf comes standard with an 8.0-inch touchscreen and a leather-wrapped steering wheel, ensuring a more upmarket feel. As always interior finishes feel high-quality with excellent fit and finish inside.

Along with the standard Apple CarPlay and Android Auto media interface Comfortline and Highline models can be specced up with a massive 9.2-inch touchscreen that adds gesture controls and a 10GB hard drive plus a configurable 12.3-inch digital instrument cluster capable of showing a range of vehicle, navigation, and entertainment displays.

Stepping up through the range, the dash and door inserts take on an array of different finishes, with different fabric trims, or leather seats for the Highline. The Highline also throws in a stack of upmarket touches like a powered driver’s seat with memory, panoramic sunroof and LED-lit ambient lighting.

Getting set behind the wheel is simple in all models with a broad range of adjustment for the seat and steering wheel, plenty of space up front, and a clear view out thanks to slim A-pillars that provide minimal interference. 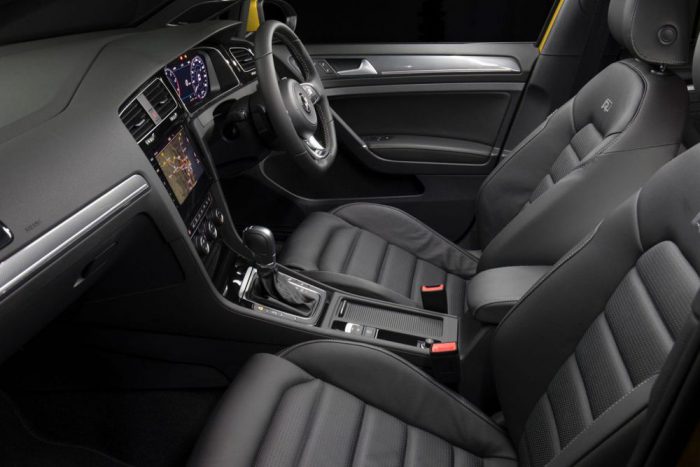 Rear seat space isn’t quite as expansive, but nor is it overly restrictive. Taller passengers may find knee space tight, but most occupants will fit without a problem and few will run out of headroom.

At 380 litres the boot of hatch models is quite a decent size and will fit more than enough luggage for a couple on a week away. Those that need a little extra space will be well served by the wagon’s handy 605 litre boot, making it an ideal family companion.

With a new, more powerful entry level engine the most basic Golf feels more lively than before. Just one petrol engine, a turbocharged 1.4-litre unit with 110kW of power and 250Nm, keeps the Golf more competitive with key rivals too.

By far the most popular transmission is expected to be the seven-speed dual clutch automatic, which has undergone minor tweaks to improve low-speed drivability compared to earlier versions.

The base-model Golf and Comfortline hatch are also available with a six-speed manual transmission, with a smooth, but firm, shift action and nicely weighted clutch that make the manual models a viable option for commuting without being a chore to drive. 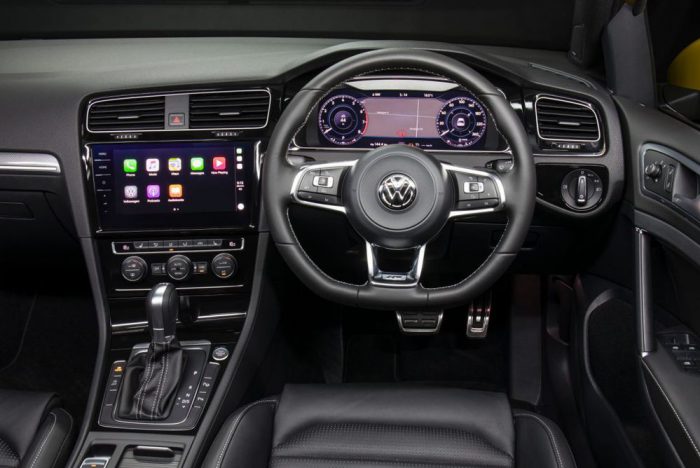 On loping country roads through Victoria’s Yarra Valley, the Golf proved itself to be every bit familiar. Current owners will know the feeling of its controlled ride, solid steering, and surprise-free handling.

Although time on city streets was limited, the automatic models seem to have improved in terms of low-speed control, with less of the jerkiness that earlier dual-clutch cars exhibited, though at times moving off from a complete stop can take some coaxing. Once rolling gear changes are impressively smooth, with an uninterrupted flow of acceleration.

Engine noise from the 1.4-litre engine is incredibly well managed, during normal driving there’s not much to hear, and even when pushed hard you can notice the engine at work, but it never intrudes with harshness or excessive noise. Wagon models tended to display a touch more road noise, perhaps owing to the larger cargo bay.

The ride on standard 16-inch wheels works perfectly with the kind of choppy surfaces offered up by rural tarmac, while the larger 17-inch wheels and lower profile tyres of upspec models did little to upset the balance.

Add the R-Line package to a Golf Highline and, as well as a series of sports-styled visual upgrades both inside and out, it comes with a lowered suspension tune with 18-inch wheels.

Ride on the firmer suspension still works a treat on rough surfaces, though sharp hits that might otherwise have been absorbed can make their way into the cabin. However the penalty for picking the more sporty setup isn’t severe, with more tautly controlled handling into the mix.

Diesel fans can choose a 110kW/340Nm 2.0-litre engine in the Highline only, and while acceleration is a little less eager than the petrol engine (0-100km/h in 8.6 seconds for the TSI hatch versus 8.2 seconds for the TSI) its robust mid range makes it feel unstoppable on hilly roads or when overtaking.

Noise and vibration levels from the diesel engine are also superbly low, there’s a hint of traditional diesel noise from time to time when accelerating gradually, or as the engine stop-start system springs back to attention, but otherwise passengers would have a hard time telling the two engines apart.

Volkswagen’s positioning of the new Golf range sees it start a little way above the pricing of most mainstream small hatches, like the Hyundai i30 or Toyota Corolla, but balances that with standard features like alloy wheels, 8.0-inch infotainment, autonomous emergency braking and a leather wrapped steering wheel or roughly equal to most of its mid-spec competitors.

For buyers that want more than just a basic runabout, moving up the range adds an appreciable amount of equipment with the Highline again priced ever-so-slightly higher than a flagship Mazda3 or Ford Focus but with a full range of standard equipment that doesn’t mean it’s out of its depth on price.

In the end, the Golf excels away from spec sheet analysis, with built-in refinement and road-holding that’s hard to fault and ensures it lives up to its ‘premium for the people’ tagline.

July 5, 2017adminNo commentsCars news and reviews, News
No comments yet